For the third time in a row in this Pro League four-part series, the Dutch national team has not won. The Dutch played a 1-1 draw against Great Britain in Santiago del Estero. The shoot-out series also ended in a disappointment for the Netherlands, after all four shoot-outs were missed. So there is still work to be done a month before the start of the World Cup.

With a sad face, the Dutch national team left the field in the night from Friday to Saturday, after another disappointment had to be processed. After the defeat against Great Britain (0-3) and the draw against Argentina (2-2) earlier this week, the Dutch team yearned for a victory. But again the Netherlands fell short offensively to hurt the British.

It was only at the end of regular playing time that the Netherlands seemed to be able to pull the game together, after a nice second half. With 34 seconds left on the clock and with a score of 1-1, captain Thierry Brinkman was able to play in a promising position, but referee Laurine Delforge did not wait for the advantage and gave the Orange a penalty corner. However, it was pushed wide by Jip Janssen. 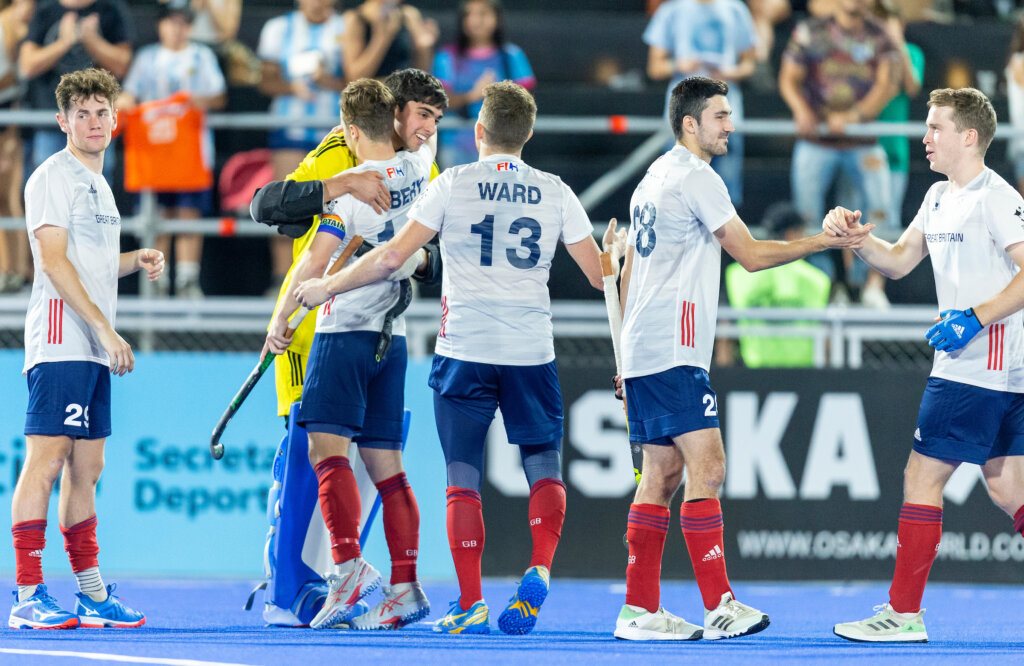 Offensively, the Orange was impotent

From the first second of the match, things did not go smoothly for the Dutch national team. In the opening phase, the Netherlands did not get into trouble, but did not yet play with the energy and fighting spirit that you expect from a team that has something to put right. Opportunities were not created.

Completely unnecessarily, the Netherlands gave away a penalty corner early in the game, which led to the goal of the British. Without an opponent in his vicinity, Janssen was unable to intercept a distant British scoop, after which defender Justen Blok got the ball on his feet and thus caused a penalty corner, the first for the British. Nick Bandurak dragged in the 1-0 from the head circle, via the foot of the stretched left leg of keeper Pirmin Blaak. It was a goal that should not have fallen if there had been sharper defense in the back.

Except for that rare mistake, the defense of the Orange was rock solid. The impotence was mainly characterized in the vanguard. The Dutch played possession of the ball for large parts of the game, but repeatedly got stuck on the British defense, without getting any great opportunities. The Netherlands did score three penalty corners before half-time, which were pushed by Janssen, but which were always made harmless by keeper James Mazarelo. 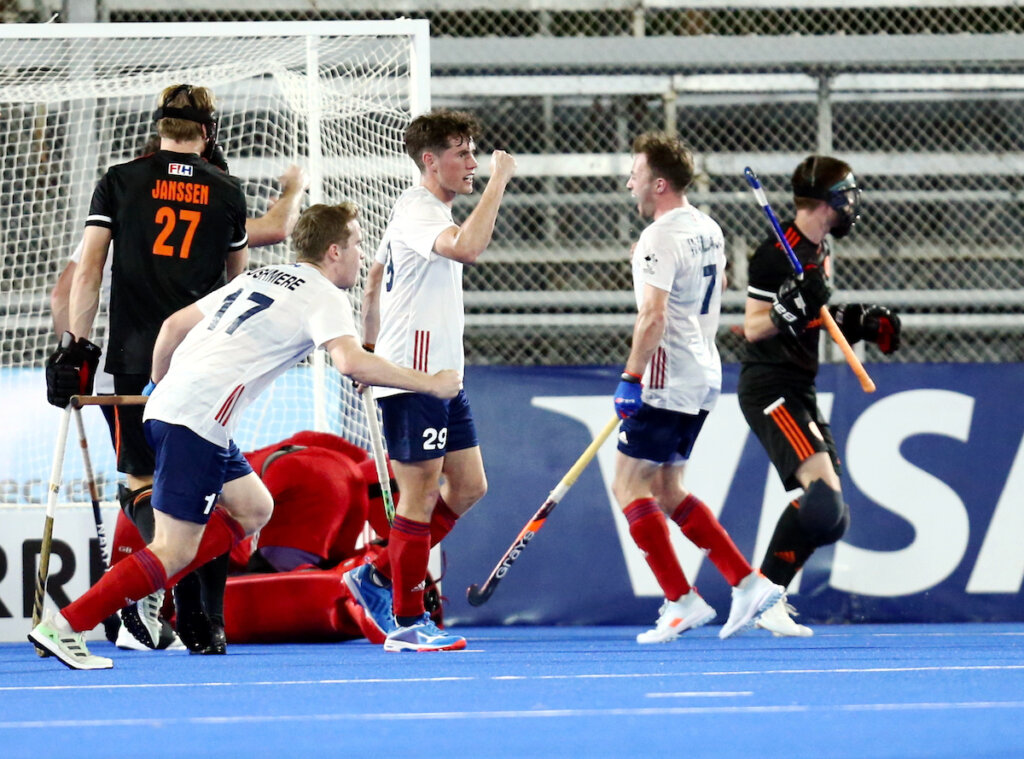 Great Britain has taken a 1-0 lead from a penalty corner. Photo: WorldSportPics/Rodrigo Jaramillo

As the match progressed, it became an increasingly physical fight, which the British were in danger of winning. Again, the Orange had the most possession, but that again did not yield anything. The third quarter passed without inspiration, without the feeling that the Netherlands was close to the equalizer.

Until the 42nd minute arrived. After an attack by the British, the Netherlands switched quickly and Tijmen Reyenga crossed half the field, after which he served Thierry Brinkman. The captain of the Dutch national team took the ball with his backhand, turned to his forehand and hit the target: 1-1. The way in which national coach Jeroen Delmée celebrated the goal, with his clenched fist followed by a loud cry, mainly expressed relief. Finally, the Netherlands could carefully smell the victory again. 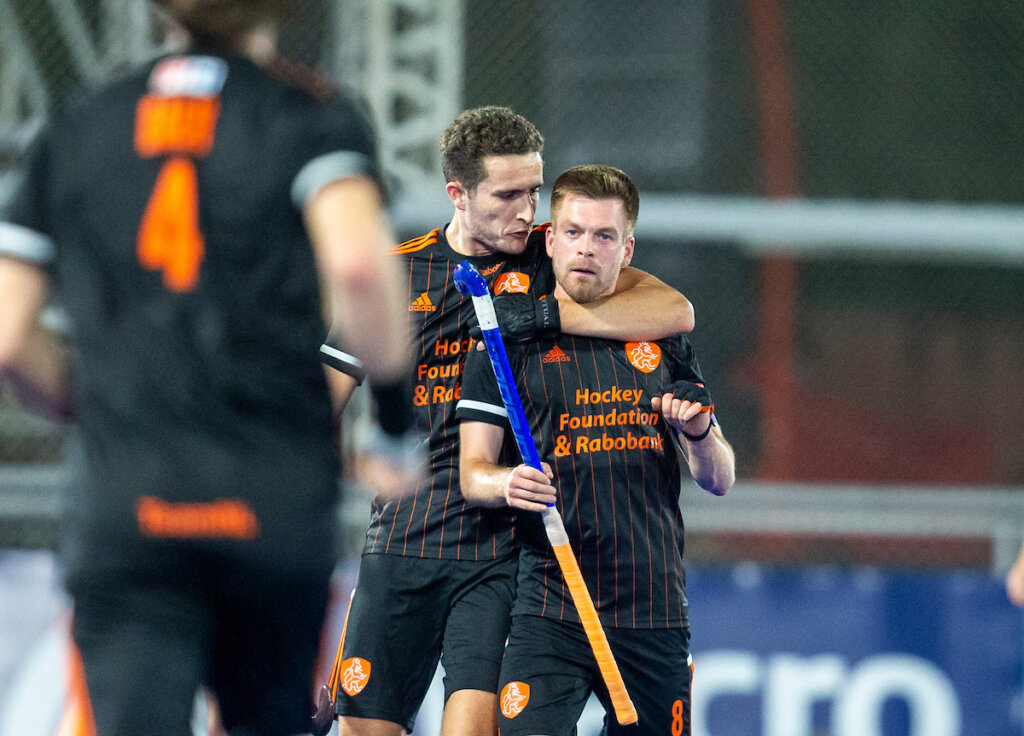 Thierry Brinkman made it 1-1 with a nice shot. Photo: WorldSportPics/Rodrigo Jaramillo

An important last quarter then started, in which it seemed that the Orange might now have the taste. For example, the Netherlands scored three penalty corners in a row, which were not converted via Teun Beins.

Subsequently, however, the Netherlands had to temporarily stop the hunt for the equalizer, due to a heavily punished yellow card for Floris Wortelboer. With one man less on the field, the Dutch gave away two penalty corners, which were stopped by Blaak, keeping the Netherlands in the game.

Just before Wortelboer returned to the line, Great Britain ended up with ten men due to a yellow card, so that the roles were suddenly reversed again. It was the perfect opportunity for the Netherlands to create some more imposed opportunities. The biggest opportunity was then for Terrance Pieters, after a backhand from Thierry Brinkman, but he shot the ball into the side net.

After Brinkman did not get an advantage in the final minute and Janssen missed the last penalty corner of the game, the Netherlands went down in the shoot-out series. As a result, the Orange in Argentina is still waiting for the first victory. In the night from Saturday to Sunday (01.40 am), the Netherlands will have the last chance against Argentina to boost their self-confidence, after three disappointing results.