In the lion’s den, a bravely fighting Orange failed to crown itself European indoor champion among the women. In a blistering final in a steaming Sporthalle Hamburg, the Netherlands remained a contender for the title until the final whistle, but eventually had to bow to host country Germany: 5-4. It is the third lost European final in a row for the Orange Women.

Two years ago, the Orange lost the European Championship final in Minsk to Belarus due to a lack of guts. Today, by playing with guts in the final phase, the Dutch team deserved a sensational shoot-out series.

The Orange showed balls at a 5-3 deficit, brought back the tension with Donja Zwinkels’ 5-4 in the last minute and even had the chance to equalize on the final whistle via Lieke van Wijk from a penalty corner. The equalizer was not awarded to the Orange, to the deep disappointment of the twelve players of national coach Kristiaan Timman. 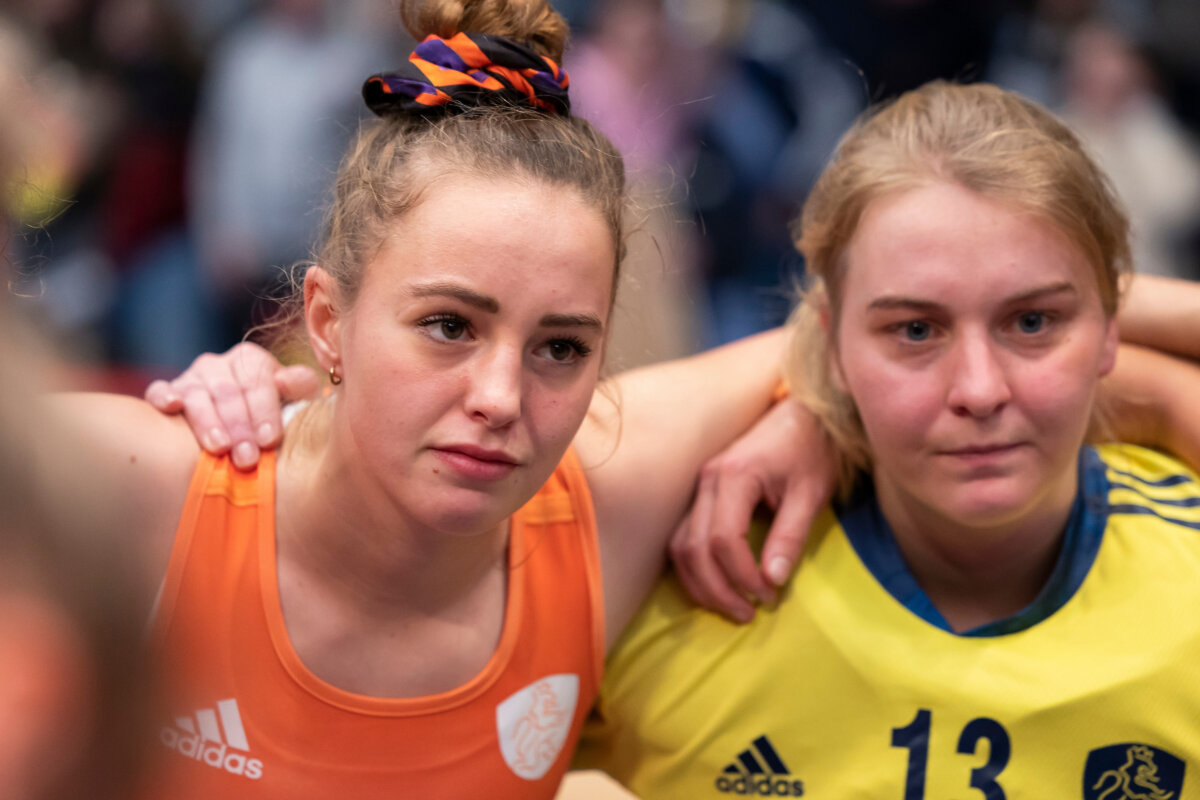 Just like in all previous matches of this European Championship, the Orange quickly broke open the score in the final against Germany. And just like in the group matches with Germany and Ukraine, Laura van Heugten played a leading role.

She took a penalty corner after just one and a half minutes, which was used by Lieke van Wijk after three instances with a drag high in the ropes: 0-1. 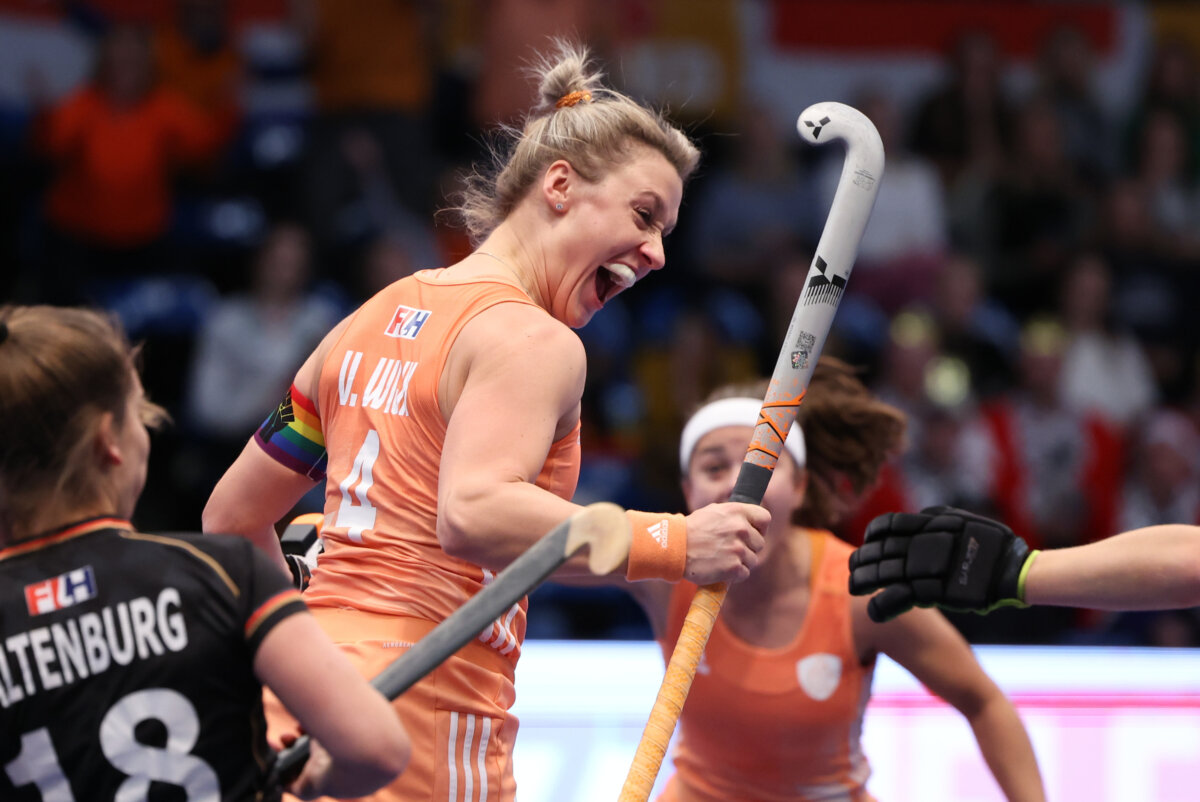 Lieke van Wijk cheers after giving the Orange the lead against Germany in the final of the European Championship Hall in Hamburg. Photo: William Vernes

That was also the last danger in the first quarter of Orange, which was quickly pushed back by the fierce German women. However, a barrage of shots from Lisa Altenburg and Pia Maertens in particular did not yield a quick equalizer, because Alexandra Heerbaart saved every time.

That equalizer came anyway. Shortly after the second quarter, the Orange was just not sharp enough with a fast German attack, which was completed by Pia Maertens, 1-1. That was already the eleventh goal of the German attacker at this European Championship. It was survival for the Orange in that phase, but with one of the successful counters, the formation of national coach Kristiaan Timman immediately struck: Noor de Baat stormed into the circle on the right and served Pam Imhof to size: 1-2. 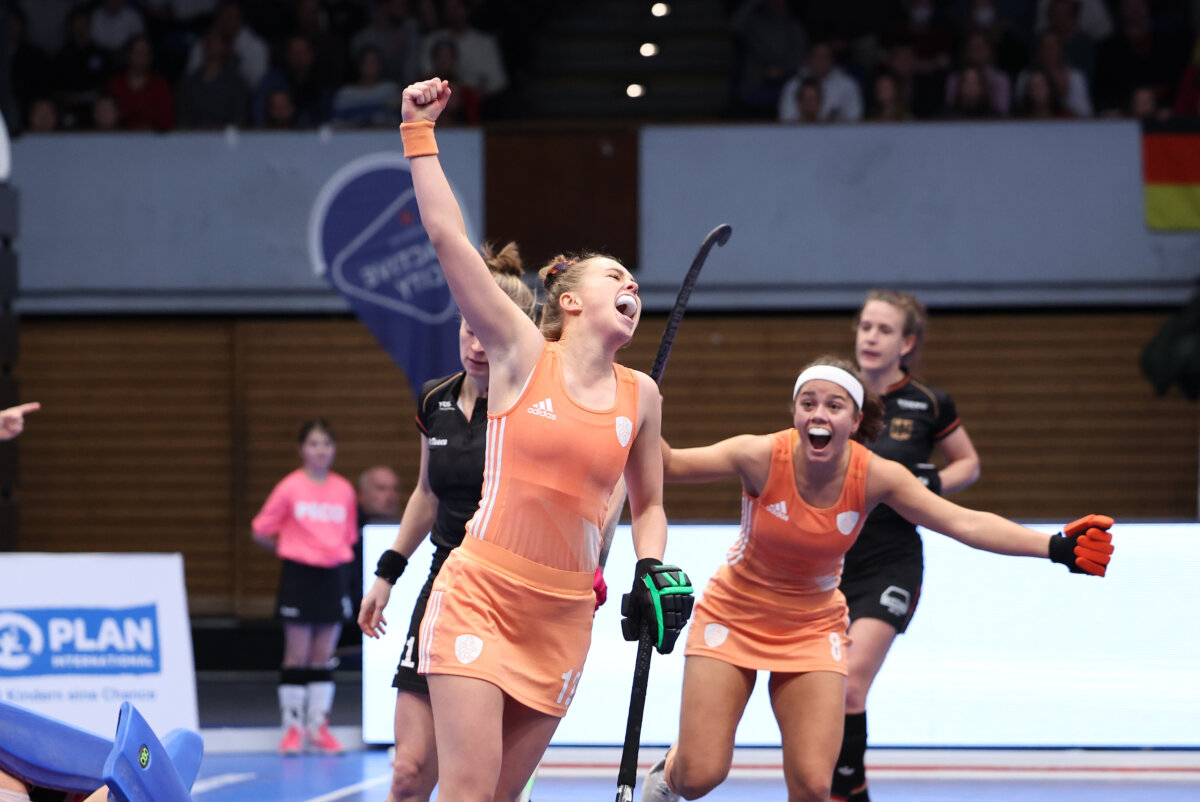 Pam Imhof cheers after her goal against Germany in the final of the European Championship Hall in Hamburg. Photo: William Vernes

Once again, the Orange had to deal with a furious German attack storm, which came to a climax in the last minute of the first half. Orange keeper Heerbaart floored Lisa Altenburg at the head of the circle and was penalized for this with a yellow card, plus a penalty corner against.

Yet it was again Maertens who hurt the Orange again. Shortly after the break, she tied the score again with a characteristic goal-oriented action, 2-2. That score seemed to create a kind of status quo for a while, until Tessa Clasener’s loss of possession led to Germany’s 2-3. Again it was Maertens who pushed from her favorite position in the left corner. The Dutch team reacted phenomenally to this setback, in the person of Donja Zwinkels. The experienced indoor diva soloed through the German circle and wonderfully pushed in the 3-3, almost immediately after the 2-3. 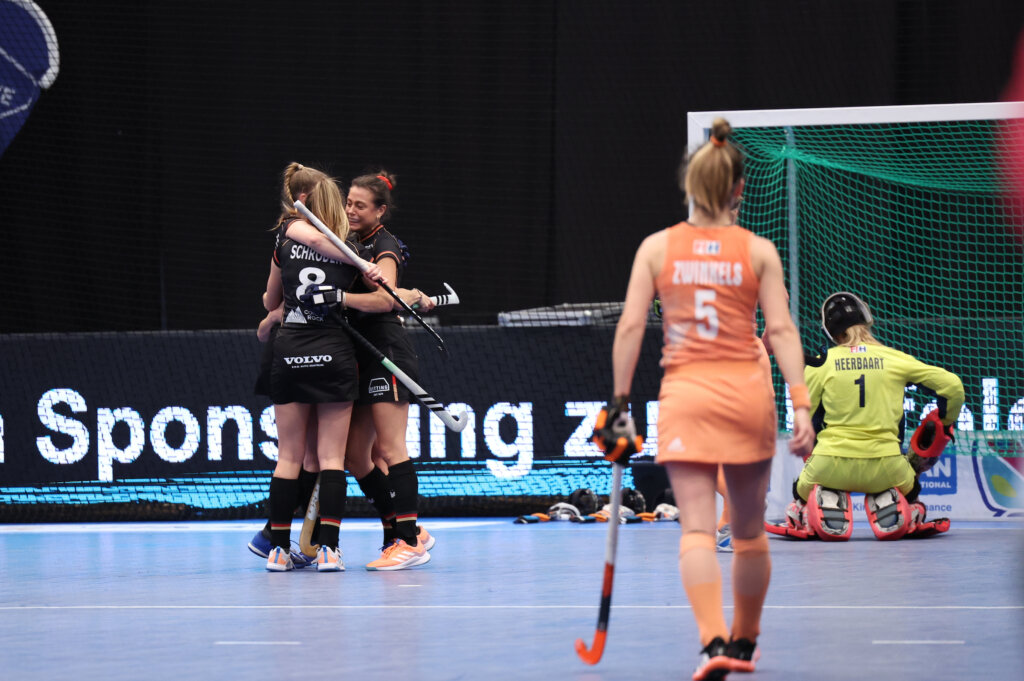 Selin Oruz and Anne Schröder congratulate goal scorer Pia Maertens during the final of the European Championship Hall in Hamburg against the Orange. Photo: William Vernes

Once again, that goal did not bring any peace to the hectic spectacle that developed before the eyes of the four thousand spectators. Germany was allowed to take a penalty corner in the 29th minute and from a smart variant it was now Lisa Altenburg who passed Heerbaart, 3-4. The same Altenburg dealt a new blow to the Orange four minutes later by surprising the outgoing Heerbaart on the right with a cunning arch ball.

With four minutes left on the clock, the Orange had to force something. Lieke van Wijk came on as an extra field player and keeper Heerbaart was able to go to the side. It resulted in a hectic and nerve-racking final phase in which Zwinkels completely brought back the tension with her second goal of the afternoon in the last minute: 4-5.

Almost in the last closing signal, the Orange was awarded a penalty corner, while all German fans and some German players were already celebrating the victory and De Baat had already accepted the defeat on his knees. When the noise had also subsided somewhat in the stands, Van Wijk pushed hard on keeper Nathalie Kubalski, after which another scrimmage ensued. Everything Orange was screaming for a new corner, but the referees saw it differently.

End of game and end of dream. Again no European title for the Orange, which celebrated its last success at the 2016 European Championship. For Germany, it was the sixteenth European title, with which the team once again confirmed its status as the undisputed indoor superpower. 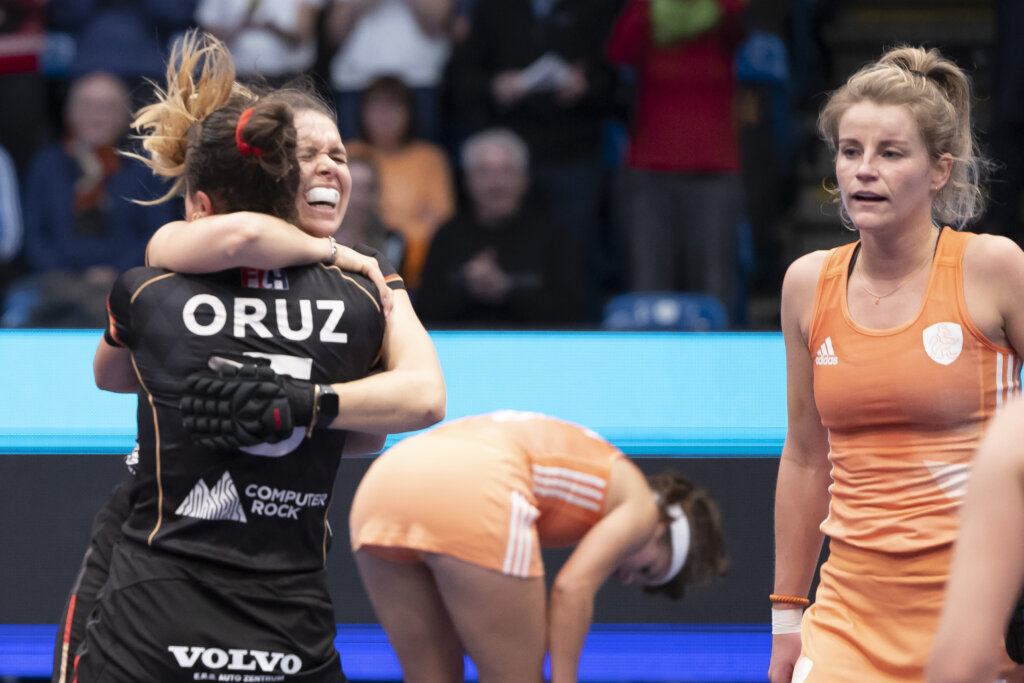 Anne Schröder and Selin Oruz celebrate after winning the final against the Orange during the European Championship Hall in Hamburg. Laura van Heugten is disappointed. Photo: William Vernes

PrevPreviousNetherlands: Supreme Orange Ladies to Fifth European Championship Final in a Row
NextIndoor: The Battle Between the Hockey Enthusiast and the Sportsman HertzbergerNext