The now world-renowned EHL KO16 and KO8 Rounds weekend has never been short of excitement and passion.

It’s a well-versed adage that you have to perform ‘when it matters’ in order to win titles and succeed. EHL’s knockout rounds encapsulate this exact pressure and emotion that accompanies elite ‘win or go home’ sport in the pressure cooker of a single Bank Holiday weekend in April.

Within England at least, it can be argued that over recent seasons, no team has better embodied the principle than Wimbledon HC.

The reigning two-time English Champions have made a habit of turning up at the big occasion in recent seasons and their trip to Eindhoven this past weekend proved to be no different.

2 years ago, after finishing third in the league, Wimbledon beat Surbiton to advance to the Championship final where they despatched regular season winners East Grinstead in a remarkable 8-5 game to win their inaugural domestic Championship.

Last season, Wimbledon finished fourth in the regular season. In the Playoff semi-final, they flew out of the blocks to beat regular season Champions Holcombe before beating Reading on penalties in the Final.

This year, it is the turn of the Wombles to go into the post-season as regular season Champions. Their 13 wins throughout the domestic campaign take them into England Hockey’s season finale with their 2017/18 EHL birth already confirmed.

After falling at the KO16 round to an elite Amsterdam side last season, Wimbledon’s second ever European adventure has been a long 12 months in-waiting.

With the weekend being held at Oranje-Rood in Eindhoven, Holland, avoiding a Dutch side in the draw was a blessing. However, the most successful club side in the competition’s history was to prove no easy feat to conquer going into the KO16 round on Saturday.

With three wins and two runners-up to their names in the 9 editions of the EHL, UHC Hamburg had an impressive history to accompany their marquee players of Mo Fürste and Nicolas Jacobi.

A strong team performance with two goals from Man of the Match Phil Roper and one from Ben Arnold saw Wimbledon minimise the threat of the talismanic Fürste to win 3-1.

An Easter Monday clash with fellow German outfit Mannheimer in the KO8 round was the reward for the West London club. A resolute and disciplined performance saw Gonzalo Peillat’s early penalty corner eradicated with two goals in as many minutes from Simon Mantell and Ian Sloan just before the break. 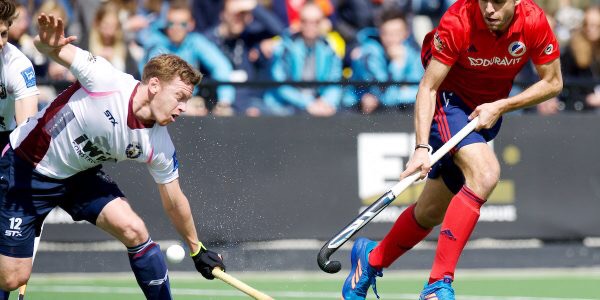 With time winding down, a Jonathan Ehling equaliser with 5 minutes to play sent the game to penalties; incidentally the same means through which Wimbledon sealed their domestic title just twelve months earlier.

Having scored 4 accomplished penalties from 4, Phil Ball stepped forward to convert the final penalty, just as he did at Lee Valley to spark mass celebrations.

“We’re really chuffed to get through to the Final 4” said Wimbledon Captain Jonny Kinder, “especially having beaten two top sides (in UHC and Mannheimer).”

Echoing his post-match interview with EHL, Captain Kinder stressed the strength of the collective as being a pivotal attribute to their success.

“It was a big team effort; everyone played their part and we really believed we could get through.”

Awaiting the English Champions in Belgium at the start of June are Dutch powerhouse Orange-Rood with host club KHC Dragons and Rot-Weiss Köln of Germany locking horns in the other semi final.

“Oranje-Rood will be a tough task but, to be honest, we won’t think too much about it for a while yet.”

Wimbledon’s overseas success sees them become only the second English side to reach the Final 4 of Europe’s Premier competition in the modern era, the first to do so since Reading HC back in 2011 when they claimed a bronze medal.

There is little time for the Wombles to rest on their laurels however, as England Hockey’s premier showpiece of the domestic season; the Playoffs, takes place at Lee Valley Hockey and Tennis Centre this weekend.

Wimbledon are looking for an unprecedented Three-peat as they begin with a semi-final against fellow Londoners Hampstead and Westminster.

“Saturday is huge for us.” said Kinder. “It’ll be a really tough game against Hampstead; they are a really good side with lots of talented individuals. We know we’ll have to be at the top of our game to get the result but we’re really looking forward to that.” 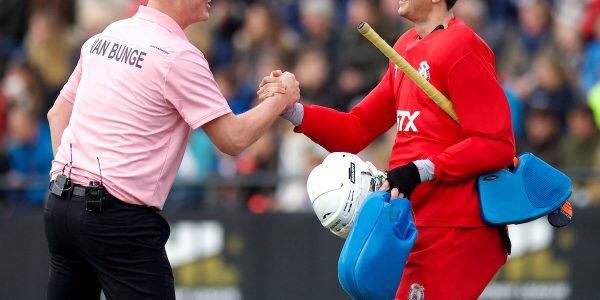 Wimbledon and Hampstead and Westminster are joined by Holcombe and Surbiton this Saturday as the the Wombles return their focus to the defence of their domestic title.