THE INCREDIBLE JOURNEY OF LEAH WILKINSON

Following her contribution to GB’s Olympic Qualification in early November, Hockey Wales and Great Britain Hockey are proud to announce that Leah Wilkinson has secured a full time contract with GB hockey.

As Captain of the Welsh Hockey team, the Most Capped Sportsperson in Wales, History Teacher by day and now GB Olympic hopeful, it’s fair to say Leah Wilkinson has built an impressive array of accolades, but where did it all start?

It was a family affair, according to Leah, as she says “I started to play hockey in Burton because that’s where my parents played, I used to play Sunday morning hockey from the age of 5 whilst my parents and sister played too.”

She went on to play at Belper Hockey Club at the age of 10, which became her home for the next 7 years. Speaking fondly of her grassroots era, Wilkinson says “I loved playing at Belper, it was a real family club and it’s where other GB players played including [our current GB] captain Holly Pearne-Webb and Anna Toman”. Little did she know at the time that she would be wearing the GB badge alongside her then role models in years to come.

Leah’s former coach from Belper, Craig Keegan, expressed his full support for Leah’s latest endeavour, as she joins the impressive list of Belper HC graduates who now feature in the GB squad, including the likes of Sabbie Heesh and Anna Toman.

“The club is very proud of their association with all of the Great Britain players that have come from Belper HC, and Leah is certainly no exception to that. Leah’s journey has been a little bit longer in transition from home nations to the GB programme but the fact that she is there now is the true measure to her commitment that she has demonstrated over the years. Do I wish she was involved sooner? Yes. But sometimes timing is everything, and I think right now the timing is right for her and I hope she succeeds. The final phase leading up to selection and the tournament itself is very exciting albeit very challenging. We wish her every success for selection [for Tokyo 2020].”

“Her experience is priceless and I think the team that was taken to Rio had a lot of very experienced players, and this team doesn’t have that level of experience yet although they have several dual Olympians, they don’t have those players with 3 or 4 Olympics under their belts like before, so I think someone like Leah with those years of experience is invaluable right now.”

Picked up by Hockey Wales at the age of 16, Wilkinson soon shot to the front line as she competed in both the U18’s and U21 Euro’s in Prague in the same year. Under a year later, aged 17 when she was playing for Sutton Coldfield, Wilkinson received her first senior cap for Wales in 2004, unbeknown to her what she would go on to achieve in the sport.

Whilst the defender continued to rack up caps for Wales, she studied at Loughborough University and went on to become a full time History Teacher. Despite balancing full time work and playing for her country, Leah still finds time to coach club and performance hockey across England and Wales.

Further down the line, Wilkinson became the Welsh Captain under Head Coach Kevin Johnson, who signed Leah at Holcombe hockey club before he was appointed to the Hockey Wales coaching team, having always believed in her ability. After attending 3 Commonwealth Games, Leah soon became the Most Capped Sportsperson in Wales with her current record standing at 169 caps for Wales, overtaking Paul Edwards’ record of 157 caps. Welsh rugby player, Alun Wyn Jones, follows in third with 143 tests to his name.

The success continued for Leah this year, as she received the call up to achieve her first Great Britain cap, 15 years after her first senior appearance for Wales. It has been a testament to Wilkinson’s character that she continues to compete at the highest level of elite sport, whilst returning to the classroom as the Head of Year 10 every week.

However, following successful Olympic Qualification, the years of perseverance and hard work of balancing her career in the classroom and as an international athlete has paid off, as she has secured a full time contract with GB hockey as their training intensifies in preparation for Tokyo 2020. The 32-year-old has been granted a sabbatical from her supportive school at Ewell Castle School in Surrey, securing her spot in the school for after the Olympic Games.

Going from watching the last Olympic final at home on the TV, the Holcombe player says the idea of her playing at Tokyo in the future seemed far fetched and “a distant prospect” after being unsuccessful in previous GB trials at 28. Now at 32, a full time GB athlete in training for Japan, Wilkinson is still humble about her achievements, stating “I’m lucky that I’m now having this opportunity. I feel really honoured and proud to represent Great Britain and be given a shot now.”

Hockey Wales is proud to have 3 players (Leah Wilkinson, Sarah Jones and Jacob Draper) in the GB training camp for the lead up to the Tokyo 2020 Olympics in what is an exciting time for hockey in Wales. #EquallyAmazing 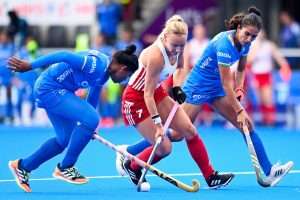