Netherlands Triumph after 3hrs of Hockey Vs Argentina

Due to a hellish storm that swept Buenos Aires on Sunday evening, the Dutch national team played a game against Las Leonas that started at 8:30 PM Argentine time and only ended at 11:45 PM. First the game was stopped, then the players re-entered the field, then they had to wait another hour and finally the game was played. The Orange did win, 3-1.

The wind blew through the stadium from the first minute, as a sign that a storm was coming. Lightning bolts lit the dark sky above the stands. Hard thunderclaps came closer and closer. After seven minutes of hockey, everyone expected what happened at a 0-0 score: the game was stopped. Temporarily. Although playing on didn’t seem like an option.

While the players were waiting on a lawn behind the stands and their patience was put to the test, the rain was pouring from the sky. After half an hour the game seemed to be resumed. Ireen van den Assem was already ready to take the free ball. But exactly at that moment the referee sent the players off the field again. A hellish flute concert sounded from the stands.

The Orange trailed 1-0 after the break

In the meantime it started to rain harder and the crowd left for the exit in large numbers. Almost no one at sports complex Cenard took into account that the game was resumed, but the Netherlands really wanted to play. Otherwise it meant a loss, as Argentina had won the game on Saturday (2-0). More than an hour and a half after the first delay, they continued to play, when it had almost stopped raining.

For quite empty stands – only the diehards were left – the Netherlands ran into problems quite quickly after it had been given a few chances. Argentina made itself heard at the start of the second quarter by decorating a penalty corner. That immediately yielded the 1-0. Just like Saturday it was Agustina Gorzelany’s sleeppush that nipped the Orange. This time he went through the legs of keeper Anne Veenendaal, who again was in the goal, as Josine Koning is suffering from a minor injury. Eva de Goede was also sidelined for the Netherlands. 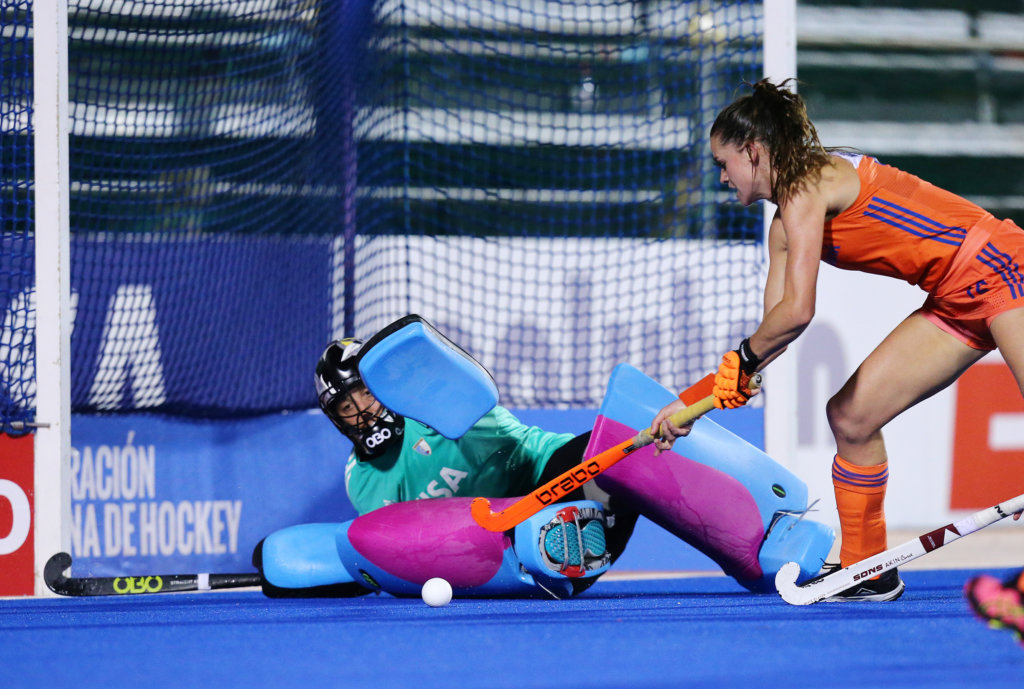 Matla and Jansen score from a penalty corner

After the Dutch team got chances through Laura Nunnink and Lidewij Welten, it was Argentina’s turn with two quick penalty corners. The Netherlands rode their luck as Gorzelany’s attempt, whose dragflick is getting better and better, shattered against the underside of the bar and somehow stayed out.

Alyson Annan’s Netherlands’ survived that strong phase of Argentina and then seemed to grow into the game. Just before the halftime whistle, the Netherlands managed to get three penalty corners in a row. From the latter it was Frédérique Matla who was brought into position from the top. She dragged 1-1 low into the Argentinian net.

Through chances for Laurien Leurink, Pien Dicke, another dragflick from Matla and one from Yibbi Jansen, the Orange Ladies looked dangerous in the third quarter. In the 42nd minute, the Netherlands got the goal to make it 2-1. It was Jansen who pushed a penalty corner against the backboard and proved her worth, despite the fact that she is no longer eligible for a spot in the selection for Tokyo.

The 3-1 from Kyra Fortuyn

In a crazy atmosphere and after half past eleven in the evening, the Netherlands had to work in the last quarter to secure the profit. On a shot over the ground by Carla Rebecchi, keeper Veenendaal made a great save. Las Leonas then continued to switch on. In the meantime, Matla left the field injured, and did not return.

Five minutes before time, the tension increased when Gorzelany returned to the top of the circle to take a penalty corner. The Netherlands held its breath. But this time Veenendaal brought salvation to her half-high flick with her glove. The Orange team then survived the final phase fairly easily. Kyra Fortuyn made it 3-1 in the final phase. As a result, the win went to the Netherlands after three hours and fifteen minutes of hockey, which recovered from last Saturday’s defeat.