The classic was won by Bloemendaal. The national champion was 4-1 too strong for Amsterdam in the Wagener Stadium on Sunday. Orange-Red suffered its first loss of the season. In The Hague, the people of Eindhoven lost 2-1. Leader Kampong had little trouble with HDM. It was no less than 7-1.

Oranje-Rood lost its undefeated status in The Hague. Despite a 0-1 lead after a brilliant goal by Thomas Briels, Klein Zwitserland turned the score around. Aki Käppeler again proved his worth for the Hague formation from the front of the circle and gave his team the victory. Despite the loss, Oranje-Rood is in third place in the Men’s Tulip Hoofdklasse. Little Switzerland, which has already won three games without defeat because of the victory, is seventh.

The classic was the duel between two teams that hadn’t started the competition very well. National champion Bloemendaal could not have wished for a better start to the match. Thierry Brinkman scored after one minute, who became the man of the match with three goals. With the win, Bloemendaal rose to fourth place in the ranking. Amsterdam dropped from six to eight and has not been able to convert a game into a win since the first day of play.

Thierry Brinkman cheers after his goal for Bloemendaal against Amsterdam. Photo: Koen Suyko

Read the report of the duel between Amsterdam and Bloemendaal

After five days of matches, Kampong has a hundred percent score. With fifteen points, the leader has a four-point lead over closest attacker Pinoké. The team of coach Tim Oudenaller had an easy afternoon against HDM. It was no less than 7-1. Jip Janssen and Terrance Pieters each scored twice for Kampong. For HDM it was the second, major, defeat of the season. Earlier, Rotterdam lost 8-1. 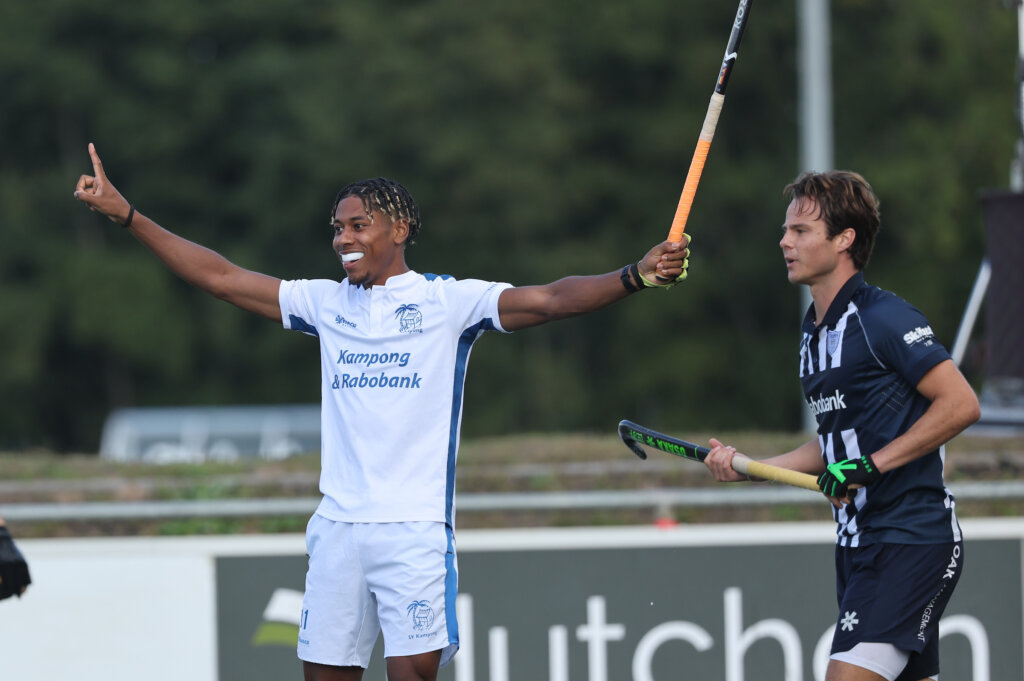 With a good penalty corner, Jeremy Hayward gave Den Bosch the second victory in a row. PhD student Schaerweijde was defeated by a small margin. For the team from Zeist it was already the fourth loss in five games. Den Bosch retains fifth place in the ranking, two points behind number four Bloemendaal.