With the men’s and women’s teams gradually returning to action, coaches Graham Reid and Sjoerd Marijne plot the road ahead. 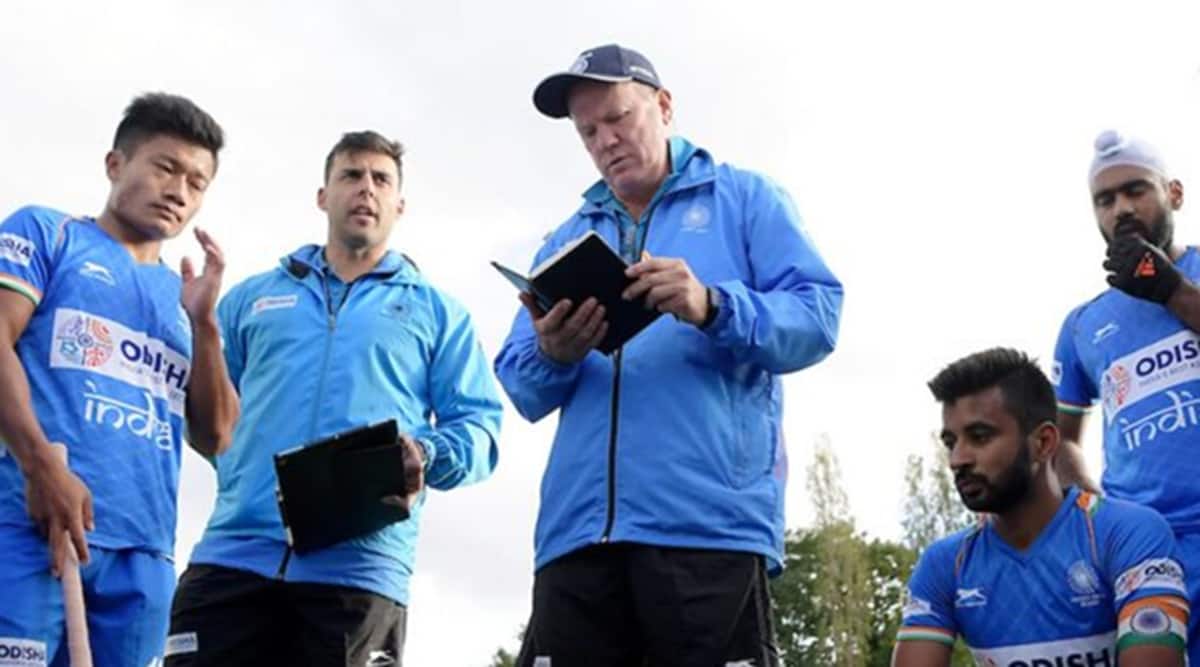 Graham Reid’s focus is to first bring their ‘basics back to a reasonable level’ before advancing to play matches within the team. (Source: File)

In the 1993 fantasy-comedy, Bill Murray wakes up every morning and realises he is reliving the same day over and over again. Reid has experienced something similar in the last several weeks.

In June, the Indian hockey players and coaches at the Sports Authority of India campus in Bengaluru went home for a break that stretched nearly two months. Reid, the Australian coach of the men’s team, and his wife Julia chose not to travel in the middle of the pandemic and stayed back.

As the number of Covid-19 cases in the rest of Bengaluru surged, the SAI facility felt like a safe zone. The campus chef also ensured they didn’t miss a meal. What they did miss, though, was human contact.

For close to 50 days, the couple was by themselves inside the centre – a sprawling, 100-acre campus; slightly uphill, in the outskirts of the city and in the middle of what resembles a forest. Occasionally, a snake or two would slither past Reid as he went on a stroll.

But their constant companions were the stray dogs inside the campus, with whom the two developed a bond. “Because there was no one, the dogs were struggling with their food. Julia loves animals… she talks to the dogs a little bit,” Reid says. “One day, I told her, ‘Julia, I don’t mind you talking to the dogs…’ but she was talking to the washing machine!” the Reids laugh.

A dash of humour was essential to see off the phase, which the 56-year-old utilised to understand the players and their struggles better. Before they went on a break, Reid had got them to tell their stories on video. After they were gone, he enhanced it with some slick editing. “I incorporated photos of their families and past games into their interviews. The amount of struggle everyone has gone through their lives is incredible, especially when you compare it to others from Australia or Holland,” he says. Graham Reid with his wife Julia; the couple was inside the Bengaluru SAI Centre for close to 50 days all by themselves during the lockdown.

Reid’s plan is to share the video with the entire squad in the coming months as a team-building exercise closer to the Tokyo Olympics.

Forced to stay away from the turf due to the pandemic, there’s not a lot that he, or the others, could do. The last time India – both women’s and men’s teams – had a full-fledged, high-intensity training session was in March. Although socially-distanced training has resumed, it will still be some more time before they will be able to return to the old training routines. And matches will take even longer.

Meanwhile, the rest of the world is moving on. Europe begins competitive hockey next month – with the domestic league followed by the FIH Pro League, the international body’s flagship tournament involving the world’s top nine national teams. The Indian players, however, will only be distant spectators, watching them play on their computer screens and analysing them.

With the pandemic still posing a threat in India, and given the travel restrictions, all commitments of the national teams have been wiped off for this year. Competitive hockey, for the women’s and men’s teams, will begin only in January 2021.

For Reid and his women’s team counterpart, Dutchman Sjoerd Marijne, the situation is unique. Both have had a calming influence on their teams. But to keep the players patient, especially when the rest of the hockey world is moving on, will be a challenge. The last time the women’s team played a competitive match was in January, while the men last played in February. Now, they have started a six-week camp, and possibly for another six weeks after that, knowing there is nothing to look forward to this year.

Although, there is another proposal on the table.

“In the back of my mind, I hope we can go to The Netherlands in October. We have made a request because the activities there have begun and we can play matches against good teams,” Marijne says, explaining that the resumption of the Dutch league and Pro League will give his side some decent match practice. Reid adds: “It will be a good motivating factor and we hope to go. But I don’t think realistically that’s going to happen the way things are panning out right now.”


Sjoerd Marijne has been able to watch the team’s training from sidelines because of the social-distancing measures adopted at the national camp.

Curiously, the Sports Authority of India said they have received no such proposal from Hockey India.

Plan B is to have intra-squad matches along with a gradual increase in the training workload. Marijne, under whom the women’s team has made substantial progress, is not worried about the fitness of the players, who he says ‘followed the fitness programme in a disciplined manner’ during the quarantine days as well as while they were at home. His agenda is to add new dimensions to their game, by introducing different plays, and making them quicker to execute his give-and-go style better.

For Reid, the focus is to first bring their ‘basics back to a reasonable level’ before advancing to play matches within the team.

January onwards, the calendar returns to some kind of normalcy. The women’s team, Marijne says, will start next year with a training tour to Singapore followed by the Asian Champions Trophy in March. A trip to Australia is being planned for April and the finishing touches to the preparations for the Tokyo Games will be applied in the Netherlands, where they are likely to travel in June.

The men hope to begin 2021 in Kuala Lumpur, where they have arranged for practice matches and joint training sessions with The Netherlands. That will be followed by a four-nation tournament in New Zealand and the Asian Champions Trophy in Dhaka, before their Pro League season resumes in April.

Both Reid and Marijne know all this comes with a huge ‘conditions apply’ warning. But for now, they are just relieved that the tedious Groundhog Days have turned into the good old training days.