In April the president of the International Olympic Committee (IOC) Thomas Bach said that everyone would have to make sacrifices and compromises. We heard him. We already were.

His views were expressed just after Japan’s prime minister, Shinzo Abe, speaking in the Japanese parliament, gave the starkest warning yet that the rearranged 2020 Tokyo Olympics, now to take place next summer, might have to be cancelled completely if the Covid-19 pandemic is not contained.

Abe stressed the importance of developing vaccines and drugs before the Games begin on July 23rd, 2021. Otherwise, he added, it will be difficult to hold them.

Athletes are the ultimate pragmatists but with uncertainty still alive and the world of Olympic sport not so much sprinting as slouching towards Tokyo, the personal cost to some Irish athletes could be irredeemable.

Two years ago the Irish women’s hockey team improbably captured the imagination of the country. A modest sport boldly sticking its head up and saying look how good we can be. After drawing two matches in the knockout phase of the World Cup, the team won magical, jittery shoot-outs against India and Spain for a place in final.

Prior to that it was a triumph if the Irish team qualified for the World Cup and won a few games. In 1986 the team came 12th and in 1994 11th. In 2002 Ireland finished 15th before the silver medal in London 2018 propelled the team to a highest ever eighth in the world rankings. The previous highest position was 14th.

This team was different. A group of women who the public had never previously heard of curiously captured the sporting and cultural climate of the summer. School teachers, accountants, students, solicitors stepping up, their lives and careers on hold and all of them holding on to a gloriously harebrained idea that if they believed hard enough and played hard enough they could win the World Cup. They didn’t quite do that. But their journey was a blast. 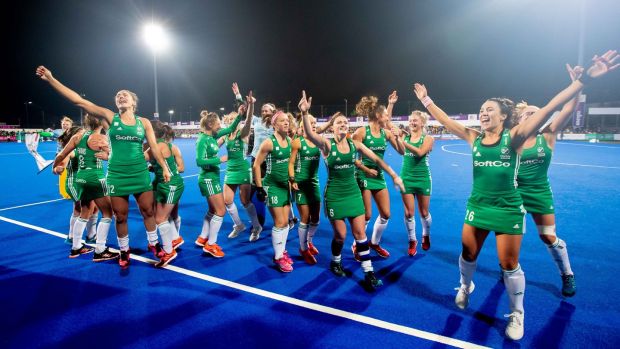 Ireland’s players celebrate qualifying for the 2020 Tokyo Olympics after the second leg of the playoff against Canada at Donnybrook. Photograph: Morgan Treacy/Inpho

They lit a fuse and made history in a baking hot Olympic Park in London’s east end and 10,000 people came into Dame Street in Dublin for the homecoming, more than had ever actually watched a hockey match in Ireland.

Then they backed it up. Keeping with the ‘Big Idea’ attitude they threw down a pop-up pitch in Leinster’s rugby ground at Donnybrook and went and qualified for the Olympic Games for the first time in history. Even those fell to the final spectacle of another do-or-die shoot-out. This was a team full of proven goal achievers. Life ambitions realised, the Olympics was real.

So the words of the IOC’s Bach and prime minister Abe might have recently dimmed some fires and while the centre continues to hold thoughts of Tokyo 2021 being cancelled entirely and the cost to this team are huge. They would become the lost generation of women’s hockey, women’s sport.

At the time of the Donnybrook qualification series and according to ages issued by Hockey Ireland, Shirley McKay, who won her 301st cap in the Sunday evening match against Canada, and Nikki Daly were 31-years-old. For the summer Olympics scheduled to take place in Paris 2024, if Ireland was to qualify again, those players would both be 35.

Three of the Irish players – Lizzie Colvin, Nicola Evans and Anna O’Flanagan – were 29 for the two matches against Canada and in four years’ time will be 33.

Teacher and coach Hannah Matthews was 28, with another four-year wait making her 32 for the next Games. Deidre Duke was 27 for last November’s two legs and will be 31 when Paris comes around, as would the shoot-out star Chloe Watkins and Gillian Pinder.

The reality is that Ireland could not carry a team to the 2024 Olympic Games with such an age profile, nine of the 18-woman squad 30-years-old or more. Team captain Katie Mullan and Róisín Upton, now 25-years-old, would be 29. Not a problem but not all of them together. It could not work.

For comparison the Dutch squad that defeated Ireland in the London World Cup final announced a squad for this year’s professional Hockey League, a tournament for elite world teams in which Ireland cannot afford to play.

There were 19 Dutch names listed with just three players over 30 and 14 of the squad aged 26 or younger, among them defender Pien Sanders, 21-years-old and already with 53 international caps.

There is nothing that can be done to change the path of a pandemic, with the optimists firmly believing Olympic hockey will take place in Oi Stadium. But this bunch of players, who strung along the country for a week or so in the summer of 2018, will eventually fall back into their offices and work places to become mothers, partners and careerists with the opportunity to play in amateur sports theatre of dreams possibly denied.

“We have worked so hard, some of us have put in 10, 12 years, and it’s also for all the players that have gone before us, all those who committed so much of their lives to international hockey and never made it to an Olympics,” said captain Mullan last year.

What a shame if fate was to deny Irish hockey’s greatest team this one bright opportunity.