A late flurry of goals saw world number one side the Netherlands eventually break Ireland down and win 4-0 at the Oi Stadium on day three of the women’s Olympic hockey tournament.

Felice Albers had given the Dutch a strong start but the Green Army – inspired by an Ayeisha McFerran masterclass – kept the Oranje raiders out for the guts of 40 minutes. But a final quarter barrage from Malou Pheninckx, Laurien Leurink and Frédérique Matla saw the Dutch ease home.

In so doing, they matched June’s EuroHockey Championship scoreline, extending their winning streak over Ireland to 30 games dating back to 1963.

“It’s tough to take; we defended really well and I am proud of how everyone kept fighting to the end,” McFerran said in the wake of the tie despite a stellar personal performance.

“I am disappointed, particularly with the last goal and didn’t do myself justice in that one but overall the Dutch showed they are number one for a reason.”

Pre-match, skipper Katie Mullan was honoured for her 200th international cap, becoming the eighth Irish woman to reach that milestone. Michelle Carey came into the line-up with Nicci Daly rested.

Early on, there was a familiar feeling when Albers deftly finished off a flowing Dutch move in the eighth minute, a sleight of hand to nick the ball away from McFerran and slot home after Malou Pheninckx picked her out on the right of the D.

The Irish goalkeeper had already shown her steel in the first few minutes, swatting away efforts from Lidewij Welten and Laura Nunnink while Sarah McAuley and Lena Tice scooped efforts off the goal line.

McFerran’s pick of the bunch was a diving stick-stop from Frédérique Matla’s ripper of a drag-flick, tipping it around the post with a measure of disdain.

The attacks came in waves but the Green Army were gritty and resolute, keeping the Oranje scoreless for the guts of 40 minutes. Maria Verschoor did have it in the net but an umpire’s referral from Xiaoying Liu ruled that out for a prior foot, adding to their frustrations.

That encompassed seven penalty corners which were well dealt with but the rearguard action was eventually breached in the 49th minute when Caia van Maasakker slammed a shot onto the inside of the post.

It fell kindly for Pheninckx and she just about got by her SV Kampong club mate, the diving McFerran almost eating up the ground to keep out a relatively simple chance.

Within a minute, the third goal arrived as Xan de Waard stormed through from the right channel and her offload dropped into the path of Laurien Leurink who flicked in on her backhand.

And the scoreline was complete in fortuitous fashion as Matla shanked her drag-flick so much that it wrong-footed the Irish defence all ends up and dribbled down the middle.

It leaves Ireland with three points from two games ahead of Wednesday morning’s date with Germany (4.15am, Irish time) 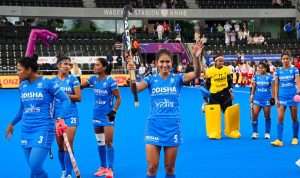 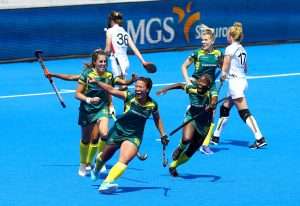