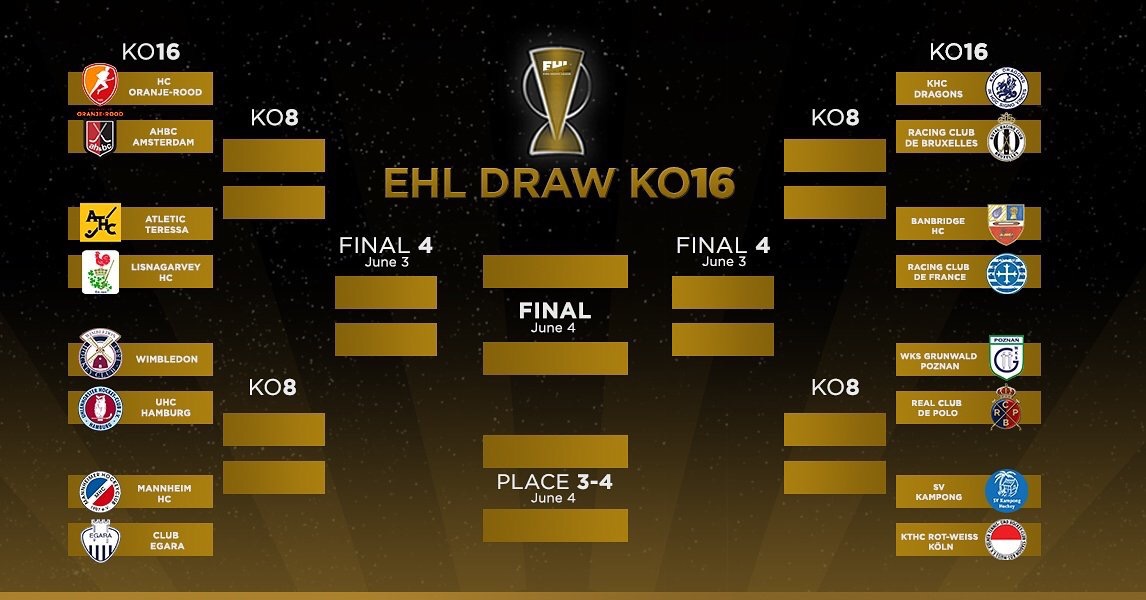 Set to take place in April at the home of Oranje-Rood in Holland, the reigning English Champions begin their European campaign with a tough tie against their formidable German opponents.

Having lost a number of key players including star striker Florian Fuchs before the start of this season, UHC Hamburg are going through a re-building phase in the German Bundesliga; a principle you would have been forgiven for forgetting as they eased through their Round 1 pool in Banbridge at the start of October.

After pushing Amsterdam close in the Ko16 round last year, the west London outfit are looking to go one better and progress to the KO8 round, where they will face the winners of Mannheim HC and Club Egara.

Winning the English Premier League Playoffs last season, Wimbledon earned a safe passage through EHL Round 1 in Banbridge that saw fellow English side Holcombe bow out at the expense of reigning European champions Kampong of Holland.

As the sole representative left in the competition, Wimbledon have the support of the country as they look to emulate a deep European run to rival Reading HC’s bronze medal as the only british accolade in the modern era of the competition.

Speaking about the draw, Wimbledon and Great Britain forward Phil Roper said; “Drawing UHC is an exciting but also challenging tie. It will be a great test of our squads strength and also, having gained a few key players, it leads towards a fantastic match. After losing last year to Amsterdam in the KO16, it would be great to really push UHC and hopefully gain the win and move into the KO8.”

Wimbledon currently sit unbeaten in second place in the Now:Pensions Premier Division and are looking to build on their solid start as they look to conquer the German Giants early in 2017.

Their rivals have enjoyed a mixed start to their domestic campaign, currently sitting in fifth position with 6 wins from their opening 11 fixtures and boast the talismanic Mo Furste in their ranks.

It is by no means the easiest draw in the competition but having avoided any of the formiddable Dutch sides until at least the semi-final stage, Wimbledon will be confident of producing an upset on the continent in April.