The Euro Hockey League got under way for its 15th season with a high scoring day one of the men’s EHL KO16 in Hamburg with Amsterdam, Gantoise, Lisnagarvey and Hamburger Polo Club advancing.

AH&BC Amsterdam will face Gantoise on Friday afternoon (14.30 CET) for the first ticket to next Easter’s EHL FINAL8 following their strong wins on day one at the EHL Men’s KO16 in Hamburg.

Amsterdam proved too good for Lille on their return to the competition after 11 years away, running up a 6-1 win.

They got underway with a lovely team goal, Matthew Dawson lifting an overhead to the Luke Dommershuijzen on the baseline and he picked a perfect pass to Boris Burkhardt to finish off on the back post.

Mirco Pruijser fired home a corner rebound to double the lead before Rupinder Pal Singh got the first of two corner goals with a rocket to the top corner. Burkhardt matched it in the third quarter with a fourth goal, again picking out the top corner postage stamp.

Singh added the fourth with low effort with 10 minutes to go before Dawson ripped in the second phase of another corner. Lille did get one back a nice tip-in goal via Antoine Bonomi, touching in Paul Piot’s cross.

In game two, a Roman Duvekot hat trick saw Gantoise advance to the KO8 where they will face AH&BC Amsterdam for a place in next Easter’s FINAL8 as they won well against Rotweiss Wettingen 7-0.

Duvekot opened the scoring when a powerful Antoine Kina pass broke his was in mid-circle and he swooped first time to net. He was on hand to finish off the next just a couple of seconds into the second quarter with Kina again making the initial inroads.

And his triple was complete four minutes into the second half with a sharp effort before Hughes Molenaer got in on the act with a powerful first time strike. Luke Madeley’s corner scrambled over the line to make it five before a Sean Murray stroke and a final goal from Timothée Clément completed the win.

Rotweiss will play Lille MHC in their ranking match on Friday (12.15 CET).

Lisnagarvey and Hamburger Polo Club both recorded their first ever victories in the Euro Hockey League, winning 4-0 each to set up a KO8 date on Friday evening.

Garvey recorded their first ever win in the EHL as an outstanding first quarter laid the base for a 4-0 victory over CA Montrouge.

It took just over three minutes to break the deadlock with James Corry sweeping home a penalty corner rebound. It was quickly 2-0 with Daniel Nelson working the ball into Troy Chambers whose shot took a heavy deflection en route to the top of the goal.

And Andy Williamson dragged in a third with just 11 minutes on the clock for a big 3-0 lead. Montrouge pushed them back into their defensive zone for mych of the second and third quarters with Corentian Sellier a regular threat.

But they were caught once more when Mark McNellis slung the ball into the danger zone where Daniel Nelson poked out a stick for the fourth goal. It put them completely out of sight and on course for their first EHL KO8 fixture.

Next up for them is a date with Hamburger Polo Club who enjoyed a dream first fixture in the men’s EHL as their superb counter-attack style saw them run out 4-0 winners against.

Polo took the lead in the fifth minute from an outstanding pitch-length move with Max Silanoglu racing down the right wing before crossing to where Constantin Staib was credited with the final touch. 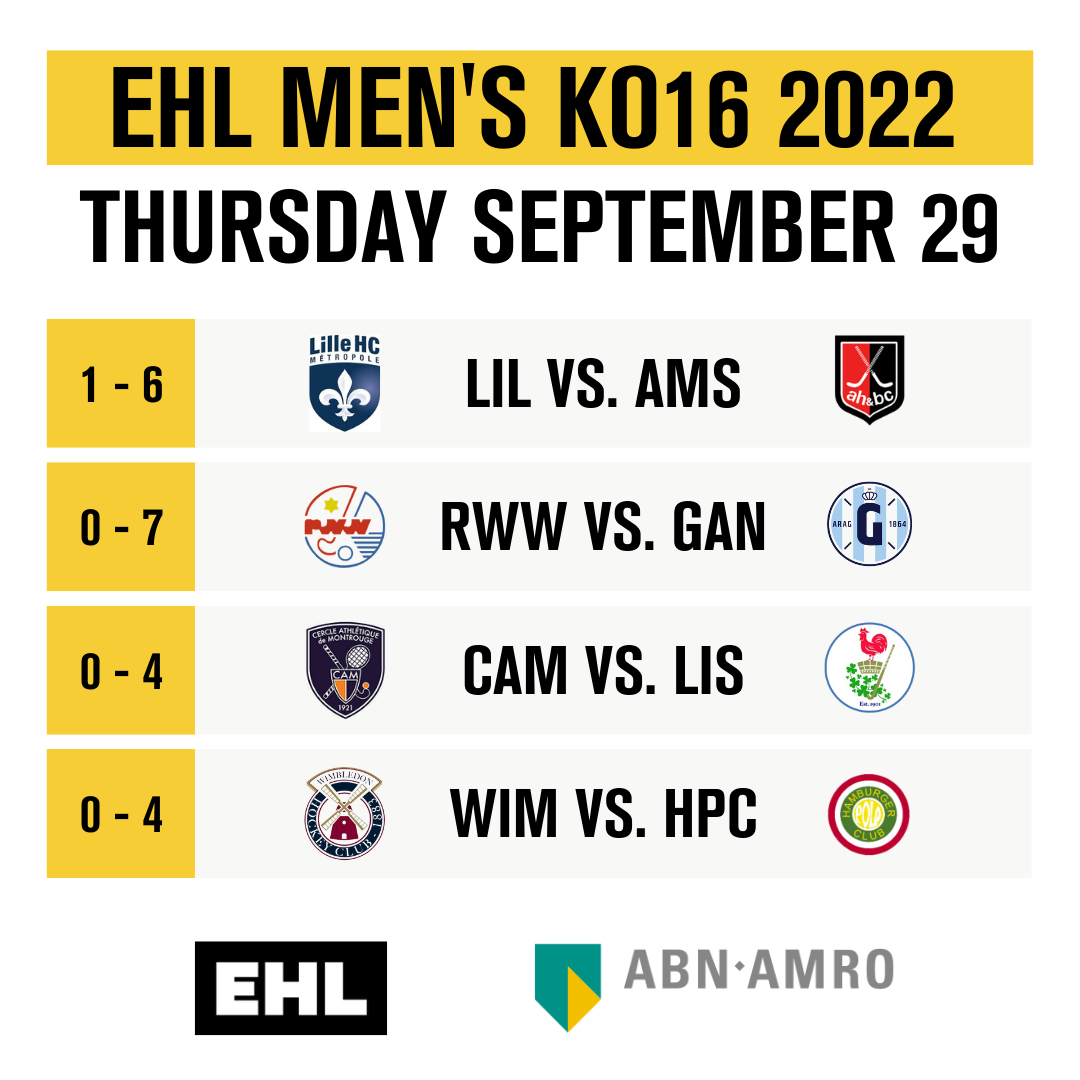 The goal came in painful fashion for umpire Jakub Mejziik who had to depart the scene in the aftermath with a dislocated shoulder.

Paul Smith made it 2-0 with an absolute peach of a goal. Niklas Bosserhoff broke down the left sideline and fired the perfect backhand pass to the top of the circle which Smith controlled and then reversed into the net.

Wimbledon held much of the ball and pressed hard to get back into the contest but Polo kept finding the goal from the fewer chances that came their way. Staib got another in the third quarter with a near post touch which defeated James Bailey.

And Kane Russell completed the victory with 11 minutes to go with a powerful drag-flick to close out the day’s scoring. Polo play Lisnagarvey at 19.00h (CET) on Friday with Wimbledon facing Montrouge at 16.45h (CET).