Day 7 at the Tokyo Olympic Games

Argentina seized the last ticket in Group A for the quarterfinals on Friday. The reigning Olympic champion defeated New Zealand in the all-deciding game: 4-1. As a result, the Argentines finish the group as number three.

Argentina-New Zealand 4-1 (2-1)
Although the result suggests otherwise, Carlos Retegui’s side had to work very hard for the final ticket. The kiwis, certain of a place in the knockout phase with a win over Argentina itself, took the lead against the Olympic champion of 2016.

Former Rotterdam player Kane Russell opened the scoring for New Zealand, but within a minute the Argentines put things in order. Lucas Martinez and Lucas Vila scored in two minutes and completely turned the score around in favor of the South Americans. 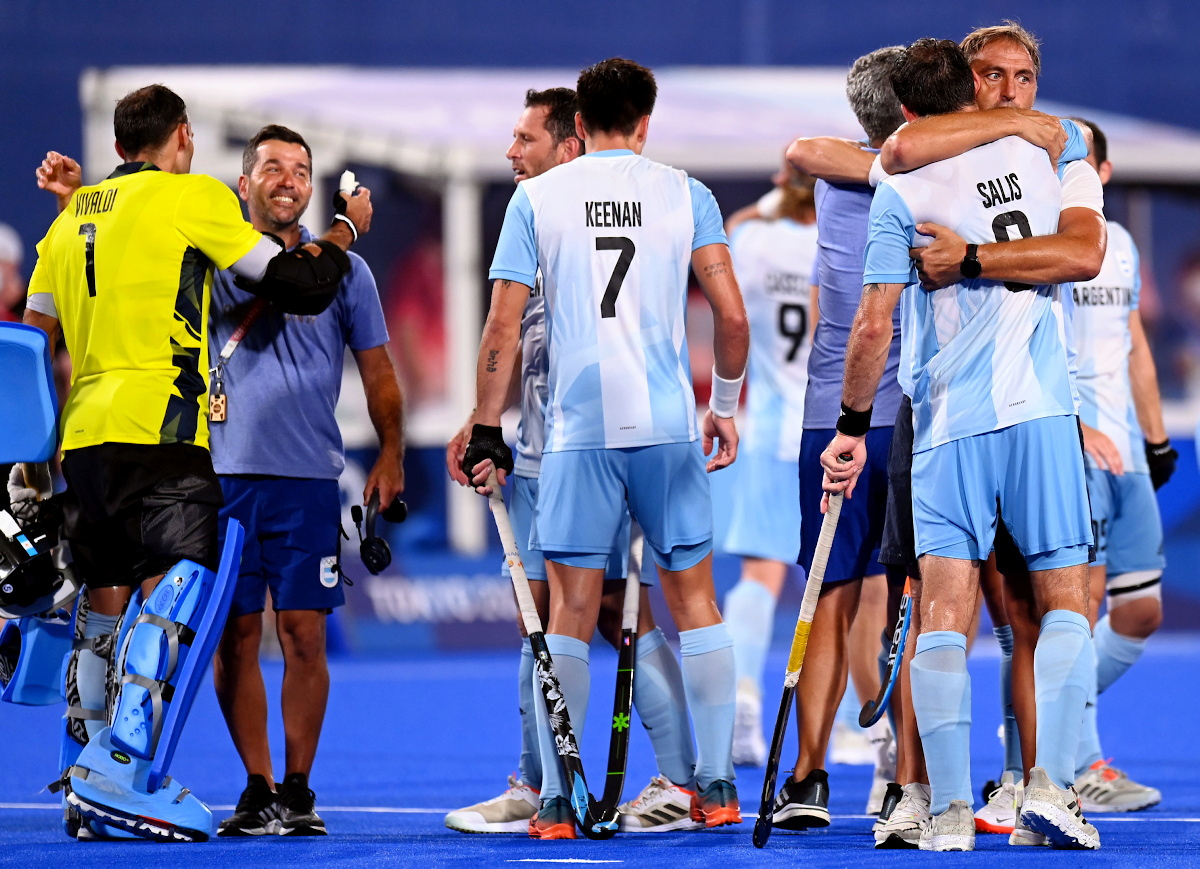 Joy among the Argentines after reaching the quarterfinals at the Olympics. Photo: FIH/Worldsportpics Frank Uijlenbroek

After a penalty corner by José Tolini at the end of the third quarter, Retegui could finally sit quietly in the dugout – especially when KZ player Nico Keenan put the final score on the scoreboard: 4-1.

Australia-Spain 1-1 (1-0)
With 54 seconds left on the clock, Spain qualified for the quarterfinals at the Olympic Games on Friday in the last group match against Australia. Routinier Pau Quemada was the goldcrest for the team that will be coached by Max Caldas after the Games. After sixty minutes, the score was 1-1.

The game, like the women’s match between Germany and South Africa , started an hour later than planned. Due to heavy rainfall, the South Pitch of the Oi Hockey Stadium was unplayable. The last group match was crucial for Spain in particular. Prior to the game with the still unbeaten Aussies , the Spaniards shared third place in Group A with New Zealand and Argentina. The three countries collected four points in four matches. 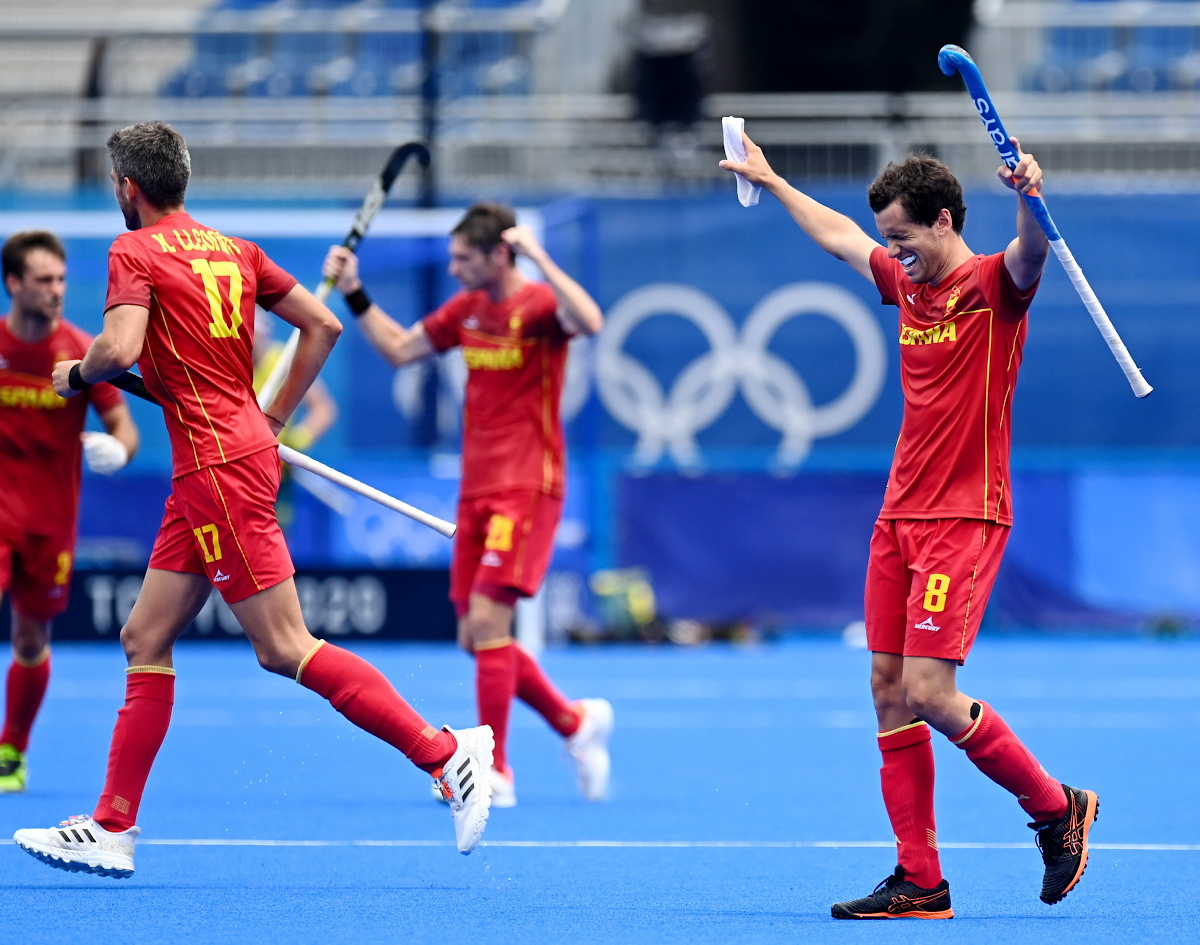 The release is great at Spain after the equalizer of Pau Quemada against Australia. Photo: FIH/Worldsportpics Frank Uijlenbroek

Spain took the much-needed point to secure the knockout stage. The Southern Europeans had to go all the way against the number one in the world. Australia led 1-0 through a goal from Tom Wickham, who scored from the rebound from a penalty corner. Former Rotterdam player Albert Beltran had the equalizer on his stick, but his flats exploded on the crossbar via an Australian stick. In the end, the 37-year-old Quemada turned out to be the goldcrest 54 seconds before time, by tapping in the 1-1 at a penalty corner. As a result, Spain is sure of a ticket for the quarterfinals.

Belgium-Great Britain 2-2 (0-1)
The Belgian men got no further than a draw against Great Britain. With that, the Red Lions could count themselves lucky, because with a score of 0-1, a flawless hit by the British was wrongly rejected. According to the refereed duo, the ball was not completely over the goal line, images showed the opposite. Great Britain had already lost the video referral, so they could not contest this decision. 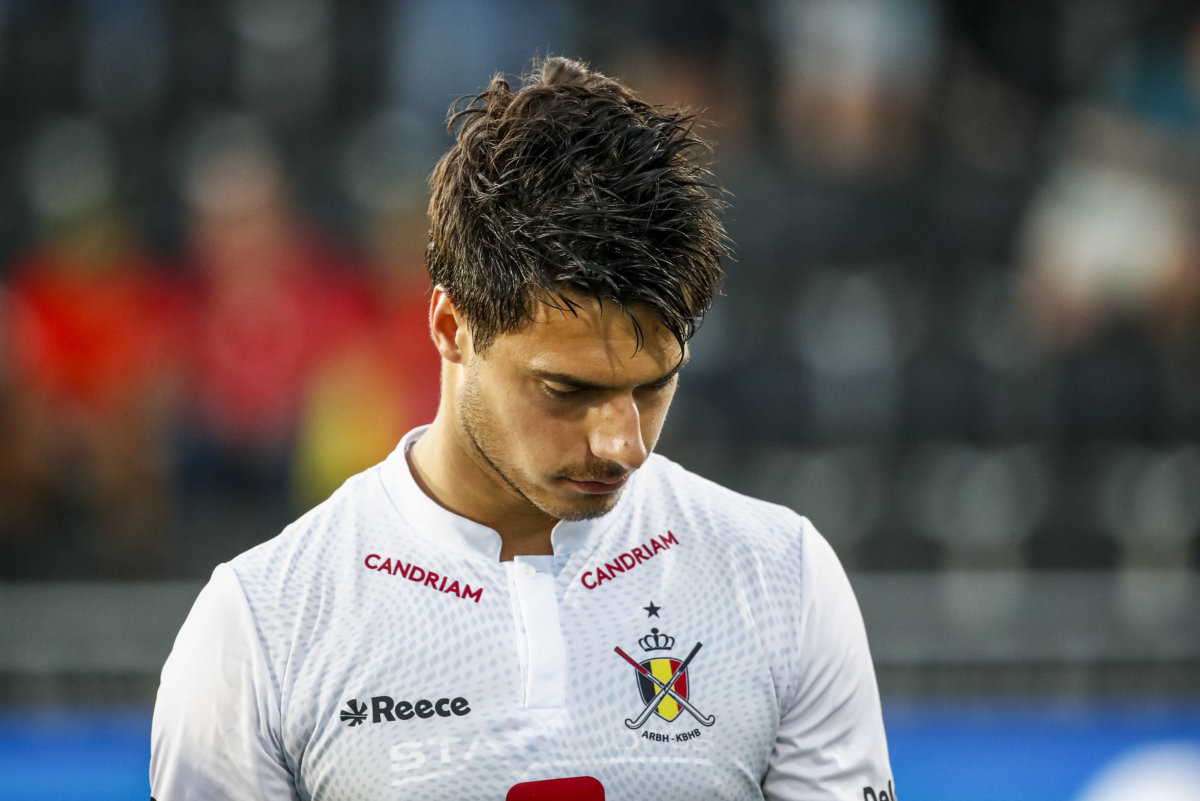 At that time, Alexander Hendrickx was already injured with the Belgians. Pinoké’s penalty corner phenomenon got a stick to his head and did not come out of the dressing room in the second half. It is still unclear how extensive the damage is at Hendrickx. Tom Boon, stand-in on the Belgian header circle, brought both teams back into balance.

The world champion could not enjoy Boon’s goal for long, because two minutes after the equalizer the ball was already in Vincent Vanasch’s goal. Liam Ansell outwitted him with a watched push. The final chord was for Thomas Briels, who put the 2-2 on the board. As a result, the Orange Men will face Australia, the number 1 in the world, in the quarterfinals on Sunday.

Japan-India 3-5 (1-2)
The men of Japan leave the Olympic hockey tournament in their own country without a win. In the final group match, the formation of Siegfried Aikman, who had already been eliminated for a follow-up in the knockout phase before the match, went down 3-5 against India. 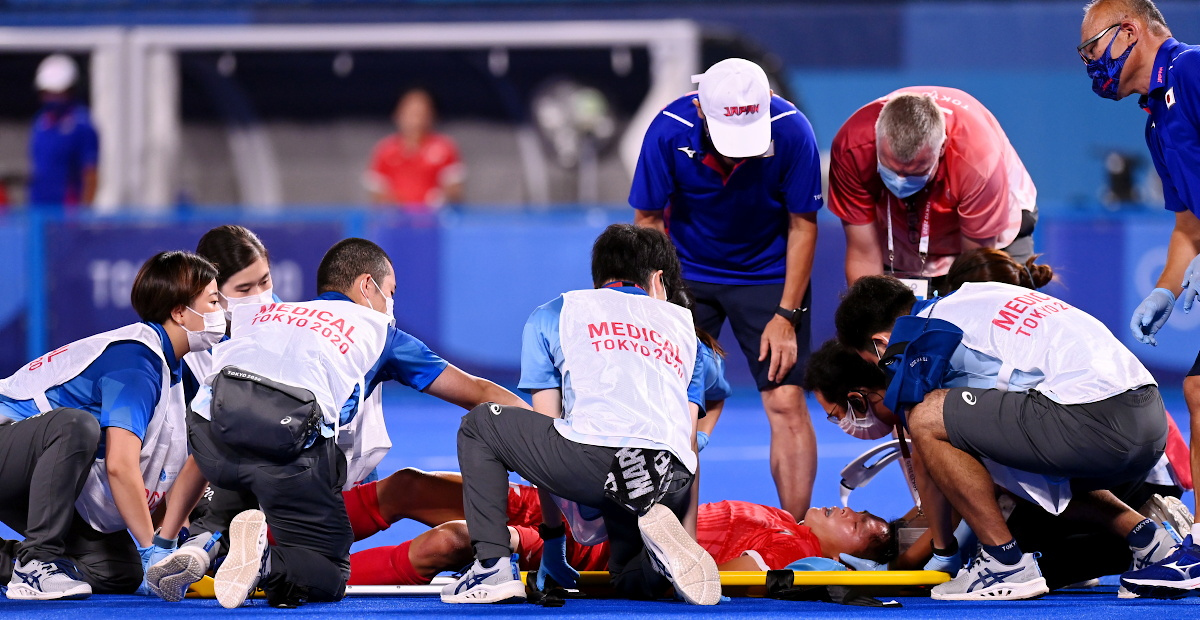 The Olympic Games in his own country had a particularly unpleasant end for Shota Yamada. He left the field on a stretcher. Photo: FIH/Worldsportpics Frank Uijlenbroek

For a moment, Japan was allowed to dream of a stunt against the  darkhorse , who finished in second place in Group A. After 33 minutes of play, the score was 2-2. At that time, HGC player Kenta Tanaka had already scored for Japan, his fifth goal this Games. Samsher Singh, Nilakannta Sharma and Gurjant Singh put an end to all Japanese illusions. Shota Yamada had a particularly unpleasant end to the Games. He left the field on a stretcher with an apparently serious injury.

Canada-South Africa 4-4 (2-2)
Gabriel Ho-Garcia scored a Canadian point at the last minute in Group B on Friday during these Olympic Games. The Almere player took care of the 4-4 in the absolute final phase of the exciting last group match with South Africa. The game had a crazy score, with South Africa taking the lead every time and Pasha Gademan’s team fought back every time. 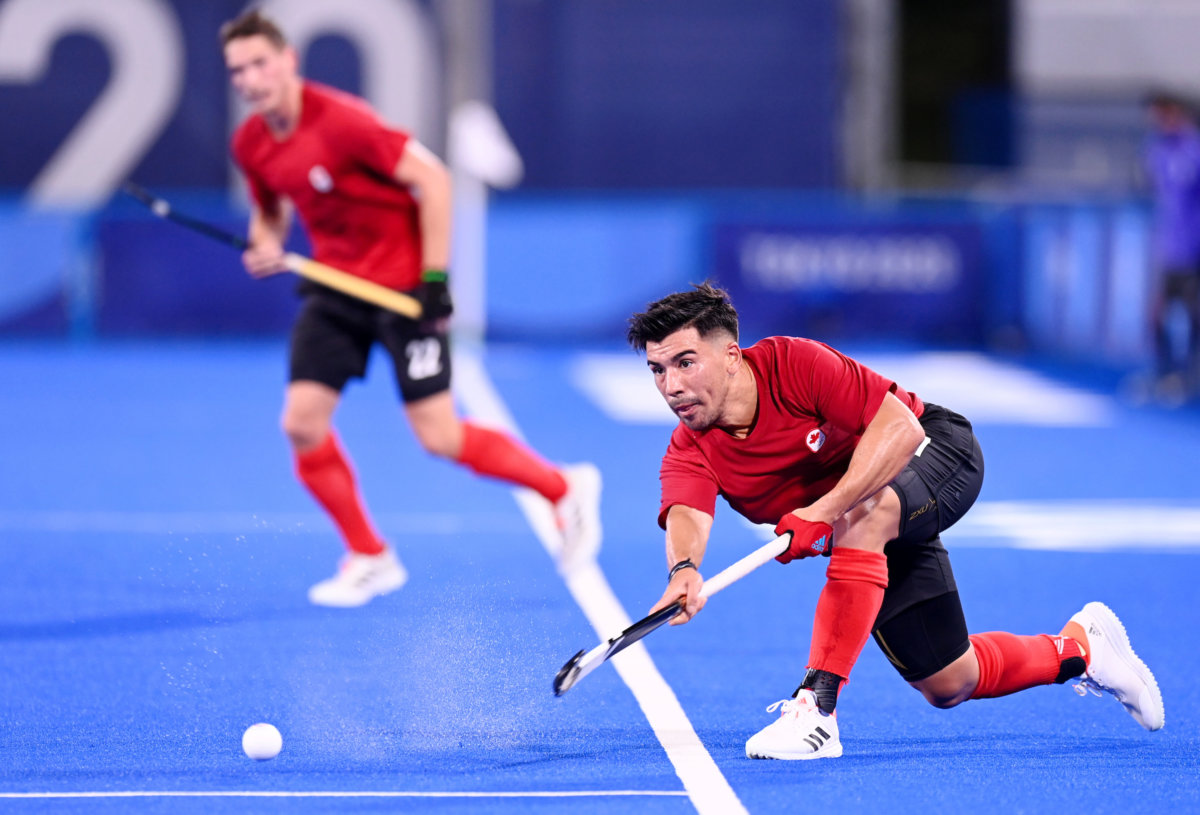 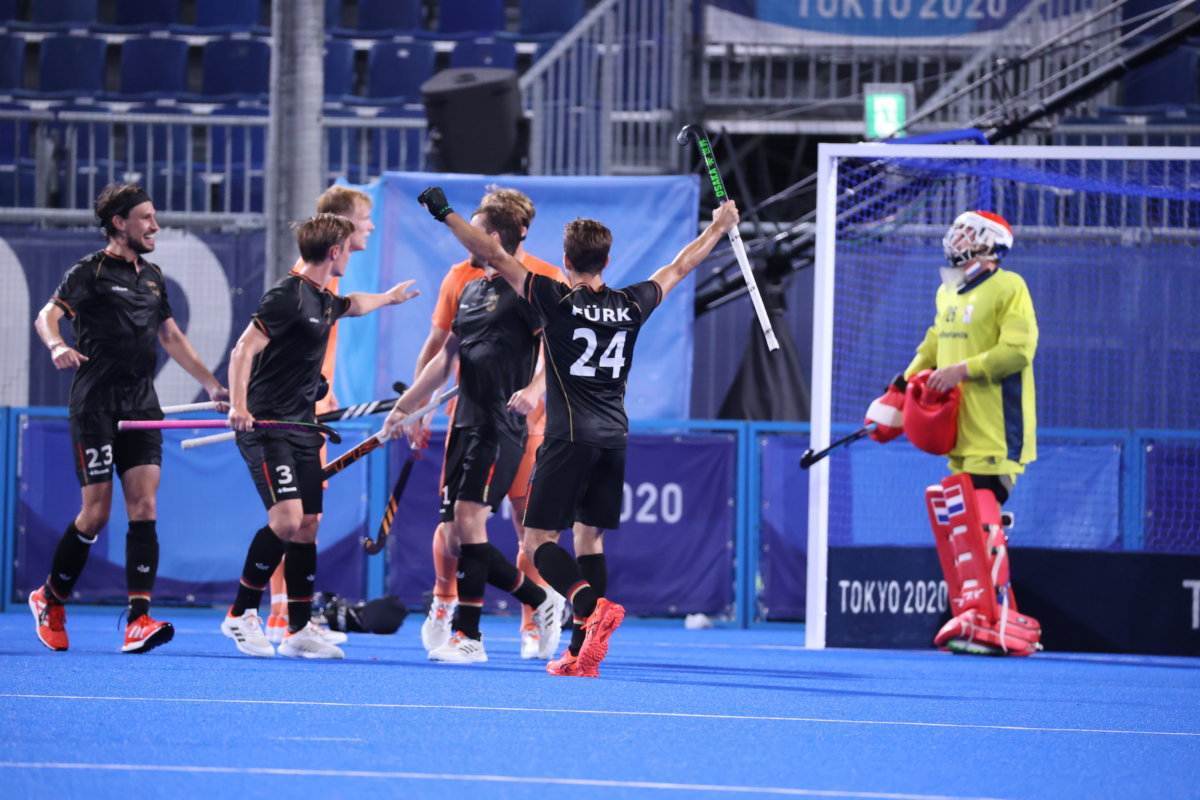 The Orange Men also do not beat Germany and enter the quarterfinals with a defeat. Photo: Koen Suyko

Read the extensive report of the duel between the Orange Men and Germany.